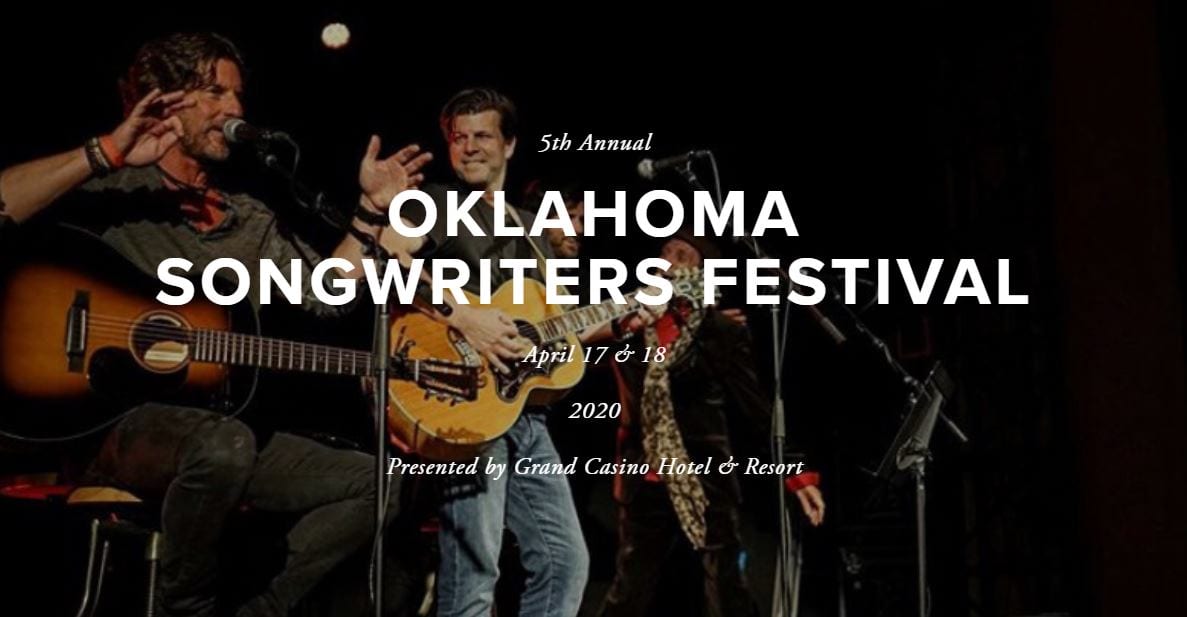 In light of the coronavirus pandemic, the fifth annual Oklahoma Songwriter’s Festival has been postponed. Keep an eye out for new dates. Find out more HERE.

Spearheaded by Oklahoma native Zac Maloy: the Oklahoma Songwriter’s Festival will be a multi-day event that will serve as an invaluable opportunity for local songwriters, musicians, music fans or anyone working in or interested in the music industry.


Presented by the Oklahoma Film + Music Office, the Oklahoma Songwriter’s Festival will host the fourth annual Songwriting Panel at Castle Row Studios Saturday, April 18. Grab a cup of coffee and a croissant and network with fellow songwriters 10-11AM. Then gather around for a panel and Q&A session with Desmond Child, Chris Tompkins, Ashley Campbell and Zac Maloy. This event is free and open to the public. Due to limited space, registration on Eventbrite is recommended.

| Chris Tompkins |
(Born Muscle Shoals, Alabama) a songwriter based in Nashville. Since 2002 he has co-written songs for pop, rock, and country artists as diverse as Jimmy Buffett, Jamie Lynn Spears, Hank Williams, Jr., Rascal Flatts, and Plain White T’s, and has written charting singles for artists such as Jake Owen, Daughtry, Shelly Fairchild, Kenny Chesney, Florida Georgia Line, and Tim McGraw. Tompkins has won two Grammy Awards for Best Country Song, first for “Before He Cheats” sung by Carrie Underwood in 2007, and again for Underwood’s 2012 song “Blown Away”. Tompkins has won a number of other industry awards as well, including Songwriter of the Year by the Alabama Music Hall of Fame in 2007. Among his recent projects is Jason Aldean’s 2014 single “Burnin’ It Down”, which peaked at No. 1 on the Hot Country Singles chart.

| Ashley Campbell |
A country music singer and songwriter, daughter of Glen Campbell. She played banjo for her father during his farewell tour in 2011 and 2012. She also appeared in the video for Rascal Flatts’ 2012 single “Banjo”. Ashley Campbell released her debut single, “Remembering”, via Dot Records in 2015. The song previously appeared on the soundtrack of the 2015 documentary “Glen Campbell: I’ll Be Me”, to which she also contributed to the track “Home Again”. The compilation from the documentary went on to win a Grammy and was nominated for an Oscar. The song debuted at No. 56 on the Country Airplay chart dated for the week ending December 5, 2015.

| Zac Maloy |
An acclaimed, award-winning songwriter and producer whose songs have been featured on numerous top-charting albums. Born and raised in Ada, Oklahoma, Maloy began playing music at a very young age. After graduating high school, he formed a band, The Nixons, while attending the University of Oklahoma. Once The Nixons went on hiatus, Maloy began writing and producing for other artists. One of his first cuts after signing to Sony as a songwriter was “Used To” on Daughtry’s eponymous first album, which has gone five-times platinum worldwide. This opened the door for Maloy to score singles in a range of genres, including Carrie Underwood’s #1 single “Temporary Home”, and Skillet’s #1 single “American Noise”. This success solidified Maloy’s move into the songwriting world and prompted a relocation from Oklahoma to Nashville, TN. Now viewed as a multi-faceted writer, he is called upon to write a wide variety of music from Underwood to Orianthi; Adam Lambert to Shinedown; Michelle Branch to Blake Shelton.

A Bluebird style songwriter show where songwriters sing songs they’ve written and tell the stories behind them. Songwriters confirmed: Desmond Child (“Livin’ on a Prayer” “Livin’ La Vida Loca”), Chris Tompkins (“Before he Cheats”), Zac Maloy along with amazing local talent. More songwriter announcements to come! It will be a night to remember! Tickets now available here.