The celebration of 2020 was an especially reflective period for the Oklahoma Film + Music Office, as we were reminded of the incredible achievements the state experienced over the last decade. While we take pride in the growth we’ve been able to facilitate, the journey is just beginning.

Over the past ten years, the primary message that OF+MO sent into the world was a signal of existence. Our outreach efforts relayed the theme “We are here! We are ready!” and hoped that it would resonate with the right people. As a testament to our belief the state’s potential, it did.

OF+MO tapped into a community of filmmakers that were looking for something different. Word began to spread about the opportunities in Oklahoma. A Los Angeles based producer informed us there was a buzz on the west coast about the “wild west of filmmaking.” With a variety a locations, a crew base that was eager, communities that were welcoming, and one of the most competitive incentives in the country, Oklahoma began to welcome more and more productions. The state quickly saw the benefits of the sharp increase in productions, as the incoming productions brought their money and their job openings to our stores and residents.

Currently, the state often experiences multiple productions filming at the same time. Our message no longer needs to focus exclusively on telling the world we’re here—they know. As the productions continue to choose our state for their projects, it’s the right time to begin shifting our resources to take full advantage of the opportunities they bring. Educational programs are being created so that as many Oklahomans as possible can benefit from the job market that the film industry creates. Infrastructure developments, such as bigger soundstages, are being constructed so that the state can accommodate larger films with bigger budgets. Film friendly workshops are being implemented around the state so that communities understand just how much they have to gain from engaging with this flourishing industry.

Across the board, the message is clear. Filmmakers have heard about the film industry in Oklahoma, and they want to be a part of it. It’s time for Oklahoma to shift our resources to make sure that we can support the recent growth and continue to expand our abilities. Producers love to film in our state because of the enticing resources Oklahoma offers them. It’s time for OF+MO to focus on the incredible potential that this burgeoning industry has to offer Oklahoma.

In 2001, Oklahoma was one of the first states to establish a local film incentive as a method of dissuading productions from taking their projects (and money) to Canada after the Canadian government introduced a national incentive in 1995. Oklahoma’s initial offerings of $150,000 led the way in adapting to the new “weapon” of the artist economy, but the cap was quickly dwarfed by competitors such as New Mexico and Louisiana that were able to offer millions of dollars in incentives. However, this steady climb worked in Oklahoma’s favor, as not every state emerged from the “race to the bottom” as victorious. While states competed with generous incentives in the millions of dollars, some state industries found that an influx of productions resulted in a shortage of experienced local crew members, while other states felt the repercussions that the finite amount of large-scale film production created.

In 2005, after four films had used the Oklahoma rebate program so far, the Oklahoma legislature decided to take the program to the next level by granting the program a $5 million dollar cap each fiscal year. This bill turned the incentive program into a revolving fund, which allowed incoming productions to be earmarked for future years and opened the door to an opportunity for extensive growth by allowing for productions with much larger budgets than previously considered.

During the mid-2000s, the Oklahoma legislature continued to revise the film incentive with changes such as lowering the minimum budget for a project (ideal for establishing infrastructure growth, as crew members can gain experience by beginning with smaller projects), adding a 2% increase to the rebate with the incorporation of Oklahoma music, raising the fiscal year cap to $8 million, and adding in special considerations for high-impact productions.

While Oklahoma has not yet raised the incentive cap to a level that would directly compete with states such as New Mexico or Louisiana, the state has experienced a tremendous amount of growth in proportion to the funds available. By 2004, four projects had participated in the rebate program. In FY19 alone, 22 projects filmed in-state and spent a collective $9,872,362.68 in local Oklahoma expenditures.

Since the program’s inception, the Oklahoma Film + Music Office has established crew and support service directories (which have seen increases in registrations every year), created relationships with productions and Oklahoma residents by establishing a number of film-friendly cities, and taken measures to grow educational opportunities that supply the workforce needed in the growing demand for film crew positions in departments such as accounting, camera, grip and electric, locations, transportation among others.

Over the last 10 years, the program has incentivized film and television productions to spend over $175 million dollars into the state economy, while the state has paid out less than $15 million.

In addition to pumping millions of dollars into the Oklahoma economy, the film incentive has created thousands of part-time and full-time jobs for Oklahoma residents. Fiscal year 19 saw 425 production days and a total of 1,756 hires. The wages for Oklahoma below-the-line crew members for that year alone were over $3 million, and fiscal year 20 is already projected to see over $15 million in resident below-the-line wages for over 900 production days.

The Oklahoma Film Enhancement Rebate Program has been incredibly successful at growing both local hires and incoming productions, with in-state, out-of-state, and internationally based productions are gaining more exposure with expanded technology over the past decade. As the number and size of productions has increased, so has the local infrastructure. Local crew members in the industry have gained experience and found upward mobility in incoming productions, support services have found ways to engage with film as an addition to their existing businesses, and communities have welcomed productions into their streets, homes, and businesses as a way to participate in the economics and the artistry that filmmaking provides. While the numbers have shown that the rebate program has brought success to the state with new heights projected to be achieved in the coming years, it is important to remember the intangibles that the program brings to the table as well.

In 2001, The Oklahoma Film Enhancement Rebate Program – The Compete With Canada Act – was created. Key points were as follows until the conclusion of the 2005 Legislative Session:

$2M minimum budget requirement – now cumulative. A production company can qualify for the rebate if they complete multiple productions within a fiscal year that total $2M if each project has a minimum budget of $300K and it meets all other rebate requirements

As a means of incentivizing the use of Oklahoma musicians, music, and music facilities for the film industry, an additional 2% rebate is now included if the production company spends at least $20,000 for music created by Oklahoma residents or for recording music in Oklahoma.

This bill proposed to immediately repeal the Oklahoma Film Enhancement Rebate Program upon passage, but did not make it out of committee and was never passed by legislature nor signed into law.

A bill which would amend the Oklahoma Film Enhancement Rebate Program as follows:

The House measure was defeated by a vote of 38-45 with 18 members excused from voting. Many members, who had previously supported the bill, either chose to vote along party lines, not to vote or were not in attendance. The program’s existing sunset date of July 1, 2014 is still in effect.

A bill which would amend the Oklahoma Film Enhancement Rebate Program as follows:

The bill passed the Senate 39-7 and the House 37-8. The rebate bill was signed by Governor Kevin Stitt this legislative session.

Over the last 10 years, the program has incentivized film and television productions to spend over $135 million into the state economy. In addition to pumping millions of dollars into the Oklahoma economy, the film incentive has created thousands of part-time and full-time jobs for Oklahoma residents. Fiscal year 20 saw 818 production days and a total of 4,206 hires. The wages for Oklahoma below-the-line crew members for that year alone were over $10.5 million. 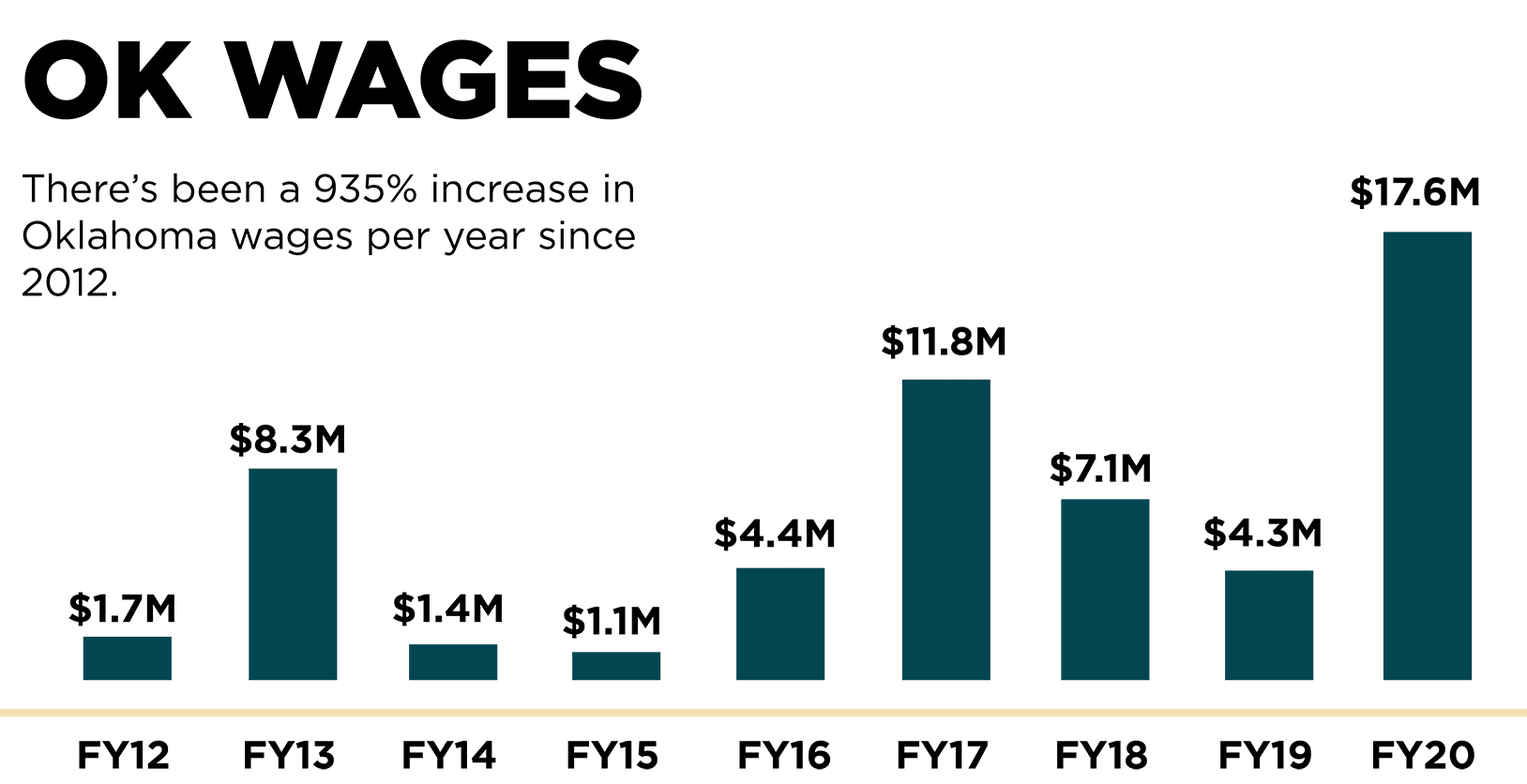 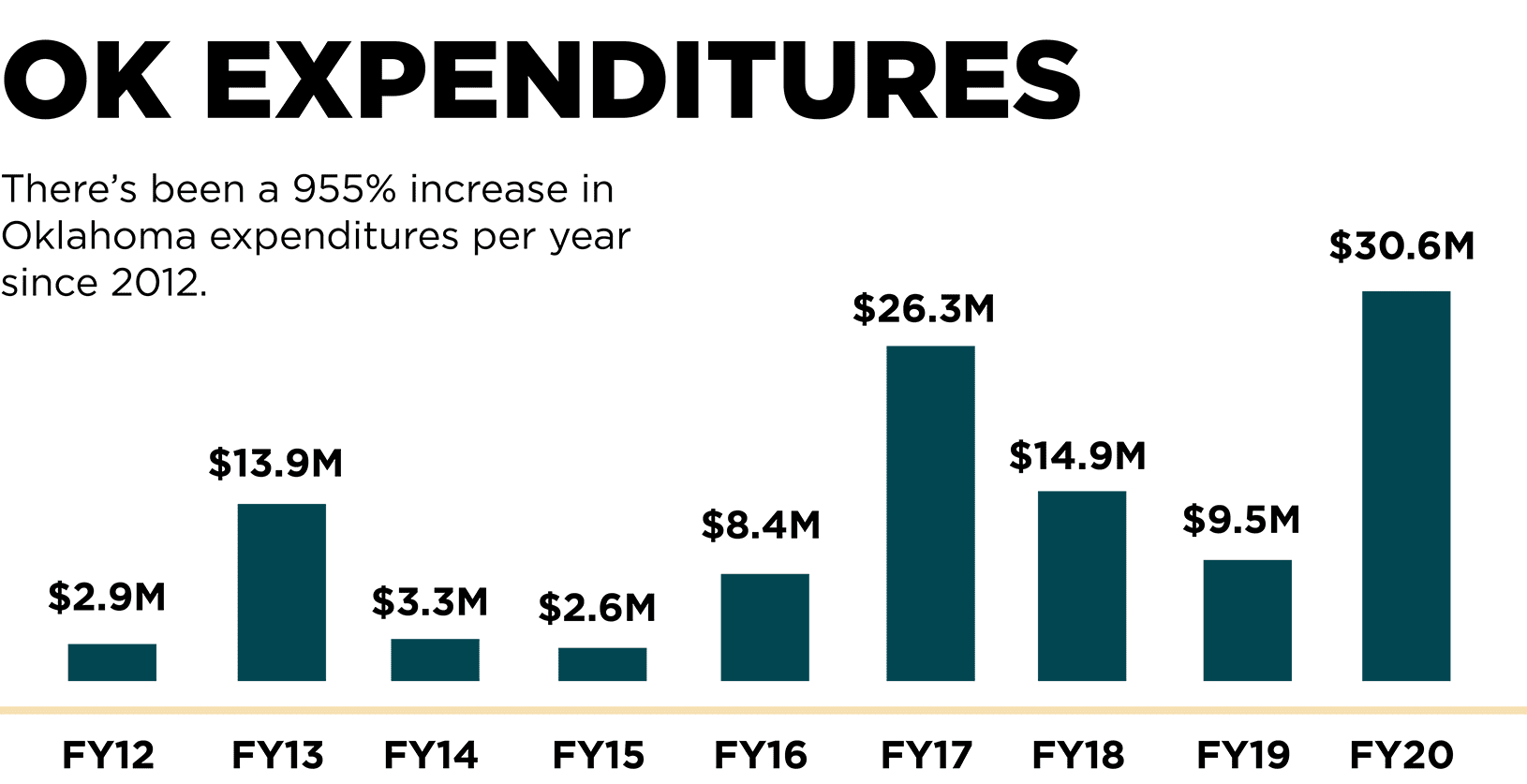 Until the COVID-19 pandemic, growth in film and television (“Screen”) production had been ground-breaking. This is being driven by increased investment from streaming services, as well as established studios and broadcasters. With spend of $177 billion, 2019 was a watershed year. This is also a conservative total, as it includes features, scripted TV drama and documentaries only. In direct output terms, Screen production is larger than sectors such as electric motor vehicles and book publishing globally In the US last year, according to calculations by UBS reported in the Economist, content spending by 16 companies was roughly equal to the sum invested in America’s oil industry in 2019. The Screen production sector is now a serious economic driver in the global economy. It is also providing a strategic opportunity for governments to build creative and digital industries and drive jobs of the future.

CLICK HERE FOR THE COMPLETE DATA FOR MEASURING AND COMMUNICATING THE ECONOMIC IMPACT OF FILM AND TELEVISION PRODUCTION!
BACK